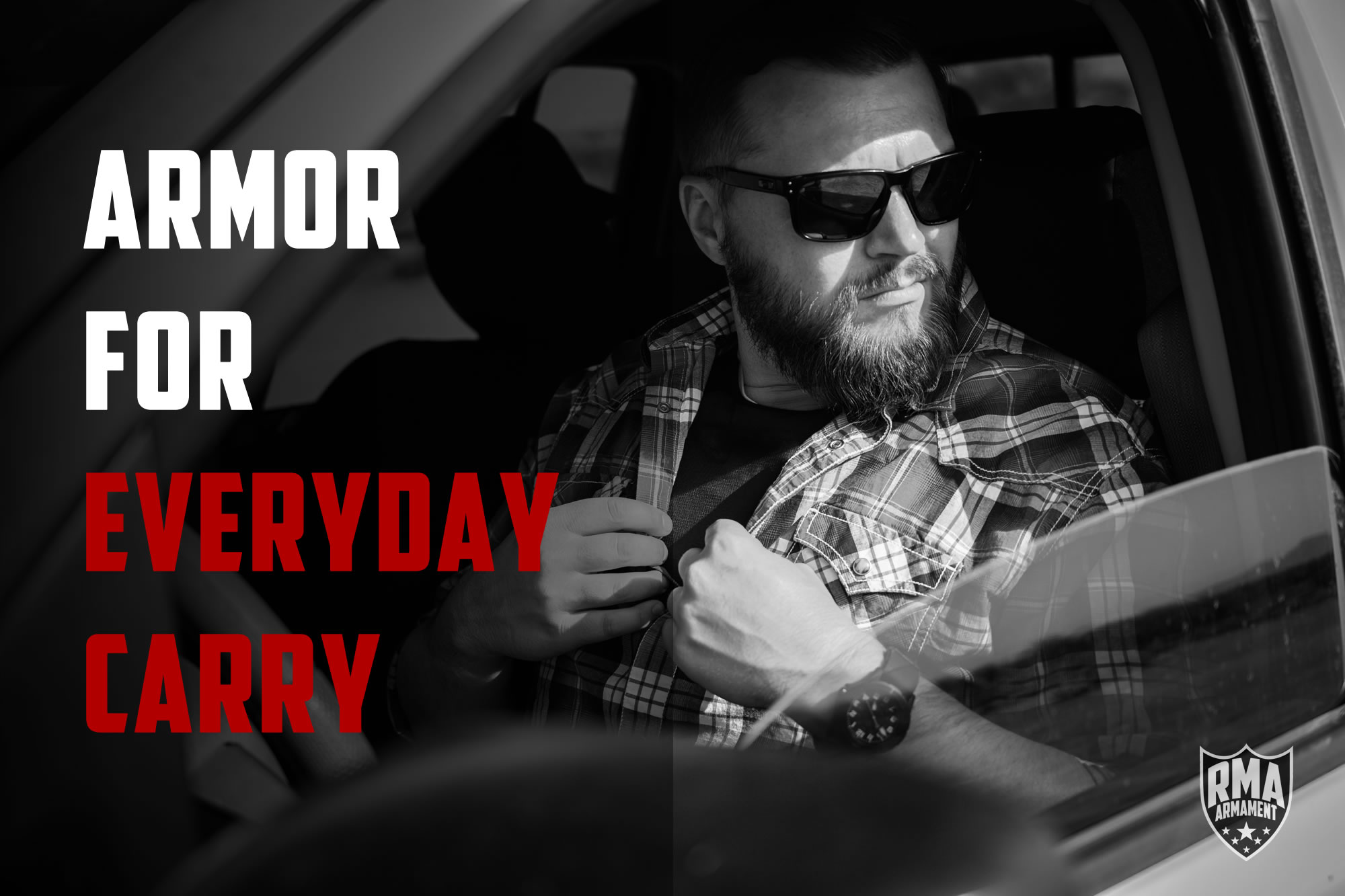 What’s in your EDC kit?

Depending on where you live and the lifestyle you lead, you might carry a firearm in your vehicle or on your person. But have you considered carrying armor?

When you need to use a firearm in self-defense, there’s a good chance it’s because you’re being threatened with a deadly weapon—likely another firearm. A basic everyday carry loadout might consist of a pistol, a knife, a flashlight, a spare magazine or two, and maybe a tourniquet or small trauma pack. Sure, you have the tools to fight back, but what if you could prevent serious trauma from a bullet in the first place?

If you’re anything like me, you’ve spent a few years as a practicing tactician to some degree. Maybe you were in the military, law enforcement, human intelligence, or high threat protection security. When it’s time to set those tools aside and resume ‘normal’ life to whatever degree that means to you, it can be difficult to overlook the various natural and man made threats around and go back to complete situational ignorance again. You’ve always got that gnawing feeling you could be better prepared with the right tools for everyday carry.

If you wore something like an interceptor vest in the military, you know how incredibly heavy and cumbersome it can be to wear armor. It takes a very high level of fitness and a lot of compromises to make that sort of system work. Fortunately, those styles of armor cuts and carriers have largely gone the way of the dinosaurs, and there are all-new technologies in materials and shapes available now that allow you to have low-profile, ergonomic and concealable protection up to and including rifle rounds. But with so many options, it can be hard to decide which ones you want to use for a specific purpose. Fret no more, friend, we’ll explain it! To be prepared for any threat, it’s important to assess what threats are most likely to present themselves to you.

What armor works best for EDC?

Many, but not all police officers wear only concealable level II and IIIA soft armor in their everyday patrol and response duties. A concealable vest is a perfect place to start since it provides generous protective coverage in a comfortable and concealable package. It’s easy to wear under a sweatshirt or jacket and have a fully hidden armor package for everyday carry. The best part is, these NIJ certified vests have a five year warranty for every day wear. RMA’s Virtus armor package includes a shirt-style carrier that looks like normal clothing, while the Protego and Contego vests have a more traditional vest shape and look. All three styles are easily concealable and perfect for everyday carry. Level IIIA soft armor is a go-to for starting any armor package since its increased coverage protects from most handgun ammunition and it maintains a covert profile. Thanks to its thin and light design, it’s easy to add rifle protection immediately on top of it should the situation arise without compromising your cardiovascular or kinesthetic performance in an emergency situation.

Most attacks on law enforcement happen with handguns, but there are increasingly dangerous and regular mass shootings occurring seemingly at random across the country. Many of these shooters have chosen to upgrade their weaponry into rifle category ammunition, which means it’s time for the rest of us to up-armor to level III and above. Fortunately, there are a lot of lightweight armor and carrier options on the market that make an active shooter response kit a practical, affordable, and ergonomic component of your everyday carry kit.

Do I have to use heavy ceramic plates for rifle protection?

Absolutely not. In fact, RMA makes ultra-lightweight level III and III+ plates that will blow your mind. If you’re thinking of military-style SAPI ceramics or ultra-heavy steel plates that are in a very real sense a ball and chain, you need to see our new UHMWPE fabric hard plates. Essentially, we’ve taken various ultra-strong fabrics— some found in many concealed IIIA vests—and stacked them thick enough to stop rifle rounds by using our hydraulic presses in our Iowa factory to pressure treat and harden out our body armor plates. UHMWPE (ultra high molecular weight polyethylene) is a categorical name for brands such as Dyneema, Dyneema Force Multiplier, Spectra, and others that are even stronger than Kevlar and other aramid fibers. Since they’re substantially stronger by weight, we don’t have to use as much material to achieve the same ballistic results in soft armor that Kevlar and other aramids used to require. But it also allowed us to explore how many layers it would take to stop rifle cartridges.

Thanks to RMA’s modern manufacturing technology, we can compress those UHMWPE fabric layers into plates nearly identical in size to traditional ceramic plates. As a result, many styles of these plates actually float in water. How’s that for lightweight performance? Some of these fabric plates also have multi-hit capabilities exceeding level IV plates since damage from a bullet strike won’t travel laterally across the fabric face. Plus, you can drop them all day long and not worry about shattering full-fabric plates with our 1078 level III model. That’s the kind of durability and dependability you want for everyday carry.

What kind of armor will stop armor piercing ammunition?

Thankfully, the use of armor-piercing ammunition in crime is very uncommon in the United States. The military still uses level IV ceramics since most nations in the world have standardized some form of AP ammo for combat use. Among the civilian population, it’s relatively difficult to get your hands on AP ammunition due to many state and federal laws that severely restrict its manufacturing and sale. If it’s still a concern, you can always kit up with our beloved and ultra-popular 1155 series in either single or multicurve shapes for comfort. Plus, it’s even our most affordable plate! If you want to take it to the next level, the RMA 1189 plate is the single strongest level IV plate in existence. Thanks to RMA’s patented ceramic patterning, each hit—even from a rifle round—creates a more limited damage profile upon the ceramic face by using the material to determine where and how far each round is allowed to compromise ballistic materials. Think of it sort of like 5.11 Tactical’s ripstop fabric used in their awesome Stryke Pants.

As a result, the 1189 plate is able to take more total pistol and rifle bullet strikes consistently without penetration than any other plate on the market—and you won’t find that kind of protection available from any other manufacturer. It’s true that these level 4 ceramic plates are heavier than our level III and III+ plates. If your threat assessment is the same as mine, there are some real tactical advantages to foregoing level IV protection in an EDC kit and picking up a set of level III or III+ plates. If you live near a lot of water such as Florida, Hawaii, Michigan, or similar places, you might find a lot of value in the buoyancy properties found in our 1078 level III plate that can aid in water-borne operations.

In places where buoyancy isn’t a concern, you’ll want to look into RMA’s level III+ plates. What’s the difference between III and III+? Level III plates generally meet or marginally exceed the test requirements for NIJ level III that require the endurance of 6 rounds of NATO-spec M80 (7.62X51mm). In RMA’s case, our 1078 level III plate will exceed baseline performance standards by additionally defeating 7.62X39mm mild steel core and high velocity rounds like the M193. With III+ hybrid plates, we were able to go beyond the testing parameters of NIJ level III and even defeat M855, XM193, 7.62X39mm MSC, and 7.62X51mm M80 NATO. M855 is notorious for penetrating through cheaper armor from other manufacturers even when they use the ‘III+’ designation. So, we made a special point of creating a lightweight plate system designed to defeat this extremely common ballistic threat. While full armor-piercing ammunition is exceedingly uncommon in crime, mild steel core rounds (generally considered to be ‘semi-AP’) are cheap and plentiful in the US. Thus, making them a very likely potential threat for any active shooter situation. With America’s longest wars ending, there will undoubtedly be a lot of this sort of military surplus available soon for very good prices on the civilian market. Be prepared with ultra-lightweight level III+ plates that keep the weight in your wallet instead of your vest, starting at only $264.99.

Go ahead and price shop it if you’d like. You won’t find anything with RMA’s 100% American-made quality anywhere close to this price point. Why? When you buy from RMA, you’re buying directly from our armor factory in Centerville, Iowa. You’re not buying from some middleman retailer that has to double the margin against wholesale cost to make a profit.

When you make your threat assessment by thinking critically and determining your choices, it’s easy to see the benefits of starting with a concealable IIIA vest. Then, having a backup plate setup designed to defeat rifle fire in a fast-donning overt carrier like our Crye Precision JPC 2.0. With innumerable modular upgrades, you can start with a Crye JPC 2.0 with level III+ plates designed to defeat most common rifle threats. Then, eventually build your everyday carry kit over time to expand your capabilities. It’s low-profile, fast, lightweight, and easy to store in a vehicle or at home. Your concealable vest works as your everyday carry go-to for ballistic protection.

For budget-conscious consumers, our 1155 single and multicurve level IV plates offer an extremely high level of protection starting at only $135. Combine it with a Condor MOPC for a total bundle price under $350 for two American made AP-defeating plates and a carrier to match any budget.

Still have questions? Ask us! We’re available through Facebook chat on our page at www.facebook.com/rmaarmament or call 866-978-7103.