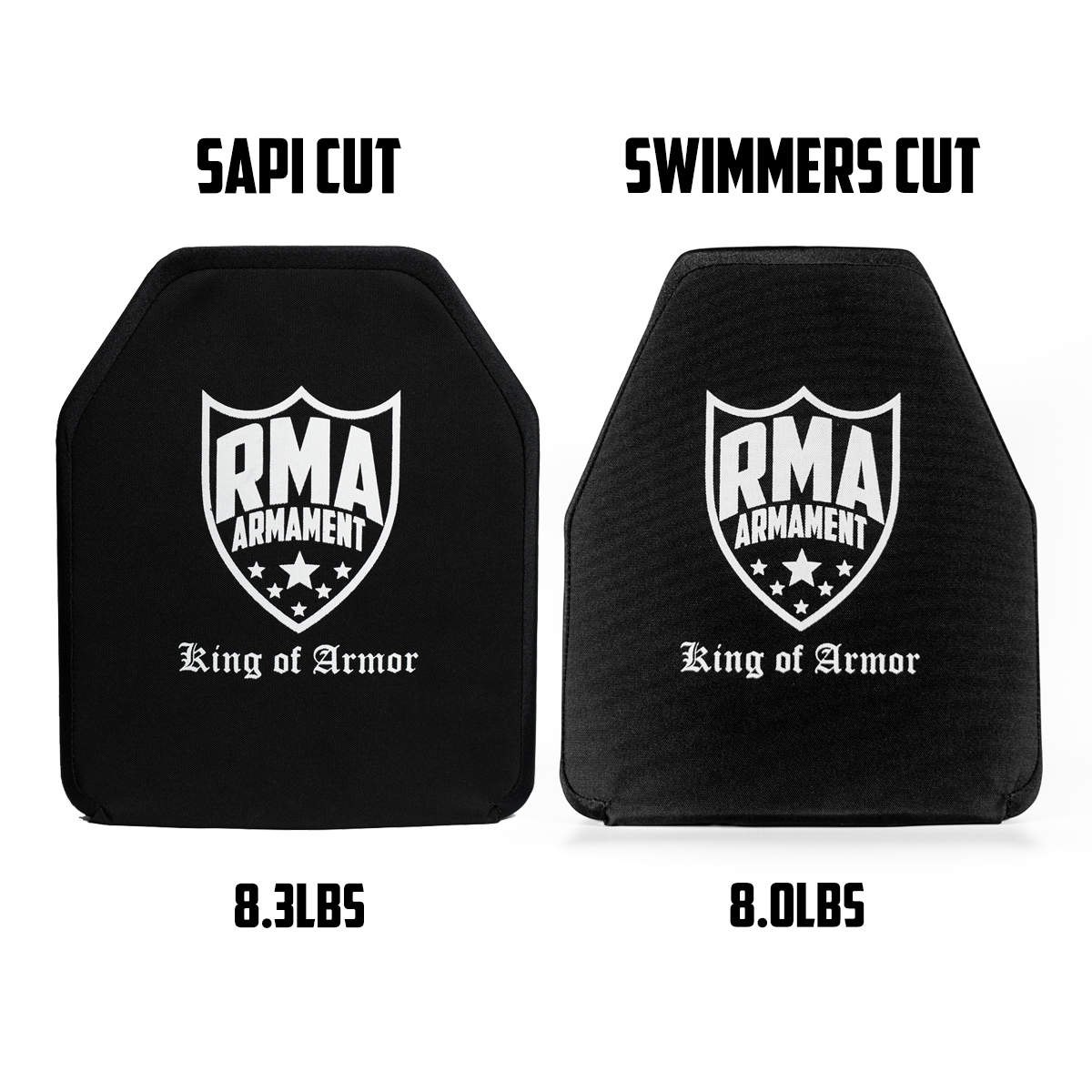 Level 4 Body Armor – What You Should Know Before Purchasing

Level IV plates are currently the highest-rated armor recognized by the NIJ.

According to the NIJ ratings, level 4 plates are only required to defeat one round of armor-piercing .30-06 Black Tip ammunition. However, during the NIJ .06 Certification testing, an entire lot of level 4 armor must also be subjected to a drop test, water submersion, temperature cycle chambers, as well as other important tests to determine the integrity of the ballistic materials. All of those tests are completed before the ballistic test is done.

If you’re considering buying level 4 body armor, we’re here to answer some of the most frequently asked questions regarding one of the most popular body armor levels. But first let’s go over what exactly level iv armor is. 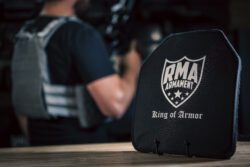 Level IV body armor is made from a hard surfaced strike face and some sort of lightweight backer. But the ceramic strike face is an integral part of breaking apart any armor piercing round. On the surface, ceramic is a hard, heat-resistant material that is also averse to corrosion. For body armor, you typcially use one of three ceramic materials for a Level 4 strike face – alumina-oxide, silicon carbide or boron carbide. Alumina is the heaviest ceramic used in body armor, but it’s also the least expensive. RMA utilizes an alumina-oxide ceramic in our model 1155 Level 4 body armor plates and 6×6 side plates. Silicon-carbide ceramic and boron-carbide ceramic are both lighter, but more expensive ceramic strike faces found in level 4 plates. RMA’s model 1192 hard armor plate utilizes a silicon and boron-carbide blend to produce a lightweight body armor plate that weighs just 5.9lbs.

Ceramic alone is not sufficient to defeat a 30.06 armor piercing round. While the ceramic does in fact break apart the ammunition, a polyethylene backer made of ultra-high molecular weight polyethylene (UHMWPE) or e-glass is required to catch the bullet fragments and minimize back-face deformation.

Compared to any type steel body armor, ceramic body armor is better at absorbing and dispersing energy than steel. This means that wearing ceramic armor will result in less broken ribs and other injuries to your bones and internal organs. And because of the ceramic, these plates performs much better versus armor-piercing bullets and high-velocity rounds when compared to steel body armor.

Level 4 body armor has historically been made from steel or ceramic composites—but as technology has changed, so have materials. Today, body armor manufacturers are using all sorts of materials to defeat ballistic threats such ceramic composites, ultra high molecular weight polyethylene (UHMWPE) fabrics, aramids like Twaron and Kevlar, steel, silicon carbide, boron carbide, carbon nanotubes, and more. Because of this broad range of materials and manufacturing methods, some level 4 armor will strictly only defeat one single round of M2AP while others will defeat multiple M2AP strikes.

Level IV body armor can weigh anywhere from as little as 5-pounds or as much as 9-pounds, depending on the materials used and shape of the plate. A declaration of level 4 armor protection under NIJ certification is a good place to start your buying decisions, but pay attention to weight, price, and total number of bullet strikes a plate can protect you from before you buy. Most importantly, ensure you purchase your armor from a reputable source and manufacturer that has a reputation for high quality products. Don’t bet your life on anything less.

What is Level 4 body armor?

Though many other formats have been tried, the only tried-and-true reliable format of level 4 body armor is the hard plate. The most common size of level 4 body armor is the 10 x 12 hard plate. The vast majority of adult humans can properly fit a 10 x 12 plate for torso and back coverage, though other formats like SAPI/ESAPI, shapes such as shooter’s or swimmer’s cut, and larger and smaller sizes exist.

What is a Level IV plate?

A level IV plate is rated to defeat one round of M2AP ammunition at a minimum before it is fully compromised. A level IV plate is the highest level of ballistic protection rated under the current National Institute of Justice 0101.06 standard. Though commonly called ‘Level 4’, the technical nomenclature to describe armor levels under the NIJ 0101.06 standard is with roman numerals in ascending levels of protection as IIA, II, IIIA, III, and IV.

Why do armor plates expire?

Armor plates don’t expire due to time alone, but for reasons of use or abuse. Warranty expiration and the material expiration are ideas that are commonly confused. Most manufacturers warranty their products for five years against defects in materials and workmanship. The expiration of your warranty doesn’t have anything to do with the expiration of the ballistic properties of your armor. There are numerous ways an end user can compromise the ballistic integrity of their armor, and they’re all fairly obvious. We discuss this in more detail in our RMA blog.

National Institute of Justice Level IV certification tests include dropping ceramic plates from a minimum of 48 inches with ten pounds of weight behind it while the plate is soaking wet. You can rest assured that your ceramic plates from RMA are protected from ordinary everyday drops.

However, be aware that if an armor plate is NOT certified, it may not have been drop tested, and therefore, you won’t know how fragile or strong a plate’s strike face may be. RMA has all of its Level 4 body armor tested with a drop test, regardless of its certification status to ensure that its testing procedures are consistent throughout the full range of products.

How much do Level 4 plates weigh?

Level 4 plates weigh anywhere from only a few pounds each up to 9 pounds each, depending on the plate manufacturer’s design and size. The less they weigh, the more you pay because lighter ballistic materials cost much more money.

How thick is a Level 4 plate?

Most standalone level 4 plates are around 1 inch thick. “ICW” or “In Conjunction With” level 4 body armor plates can be much thinner, but require another backing material like a IIIA vest to perform at level 4 standards.

Are there Level 4 steel plates?

In the past, there have been steel level 4 body armor plates, though steel on the whole is not recommended for use as body armor for a variety of reasons – from weight and spalling to improper heat treatment and more. But more recently, there is no longer steel body armor on the market – most likely because because the overall weight and its inability to defeat high velocity steel ammunition, the minimum standard for level 4 armor certification by NIJ. Typically, level IV plates are built only with ceramic and composite material. This is because if steel was used for level IV armor, it would be around the same thickness and would most likely be 12-15 pounds per plate – maybe more.

No. Level 4 armor is legal to own in all 50 states if you are an American citizen with no prior felony convictions.

What will Level 4 plates stop?

How many hits can a ceramic plate take?

While NIJ tests confirm that any certified level 4 plate will stop a single round of M2AP 30-06, some plates can go beyond this single hit certification. Additionally, most level 4 ceramic plates can handle a surprising number of lower-powered rounds like 9mm, 5.56mm, and others that impact with far less force than M2AP. Each of RMA’s ceramic plates are multi-hit capable.

RMA Armament’s plates are designed to defeat bullet strikes all the way to the very edge. However, not all level 4 body armor plates from every manufacturer are designed this way. Here is an example of the stopping power RMA’s plates have against edge hits.

How strong is Level 4 body armor?

While some level IV body armor has been shown to defeat 50 BMG under very controlled and specific circumstances, no body armor should never be depended upon to defeat 50 BMG. With so many variables such as wind resistance, air pressure, back face deformation, bullet construction, round powder load, and distance to target involved, a round capable of destroying an engine block in a moving vehicle or humanely killing an elephant at 1,000 yards will destroy you with absolute certainty even if your armor plate, “catches” the bullet.

Is there Level 5 body armor?

No. The National Institute of Justice does not have a certification standard for “level 5,” and level 4 will remain the highest ballistic standard.

Do I need Level 4 plates?

Choosing armor products that are right for your lifestyle can be complex, and not every type of armor is right for everyone in every situation. We encourage you to follow the RMA Armament blog, where we often discuss use case scenarios and proper application of different armor products, style, and levels. Body armor is typically employed to the highest common threat level the wearer might encounter.

For example, police officers most often don’t wear level 3 or 4 plates for everyday duty due to their bulk, weight, smaller coverage area, and inability to stop more total rounds from handguns than soft IIIA armor vests. Since the vast majority of ballistic threats faced by police are from handgun rounds like 9mm and .45 ACP, rifle plates would get in the way of everyday tasks and fatigue an officer’s muscular and cardiovascular systems more quickly than soft IIIA armor while providing no additional protection from the vast majority of ordinary ballistic threats.

Purchasing body armor isn’t just about buying the highest number you can. It’s about tailoring the minimum amount of bulk and weight necessary to the application at hand, price notwithstanding. Surviving a hail of bullets doesn’t come down to the ability to absorb them until your attacker runs out of ammunition; it comes down to ending or exiting the fight. Your armor system should compliment that strategy.