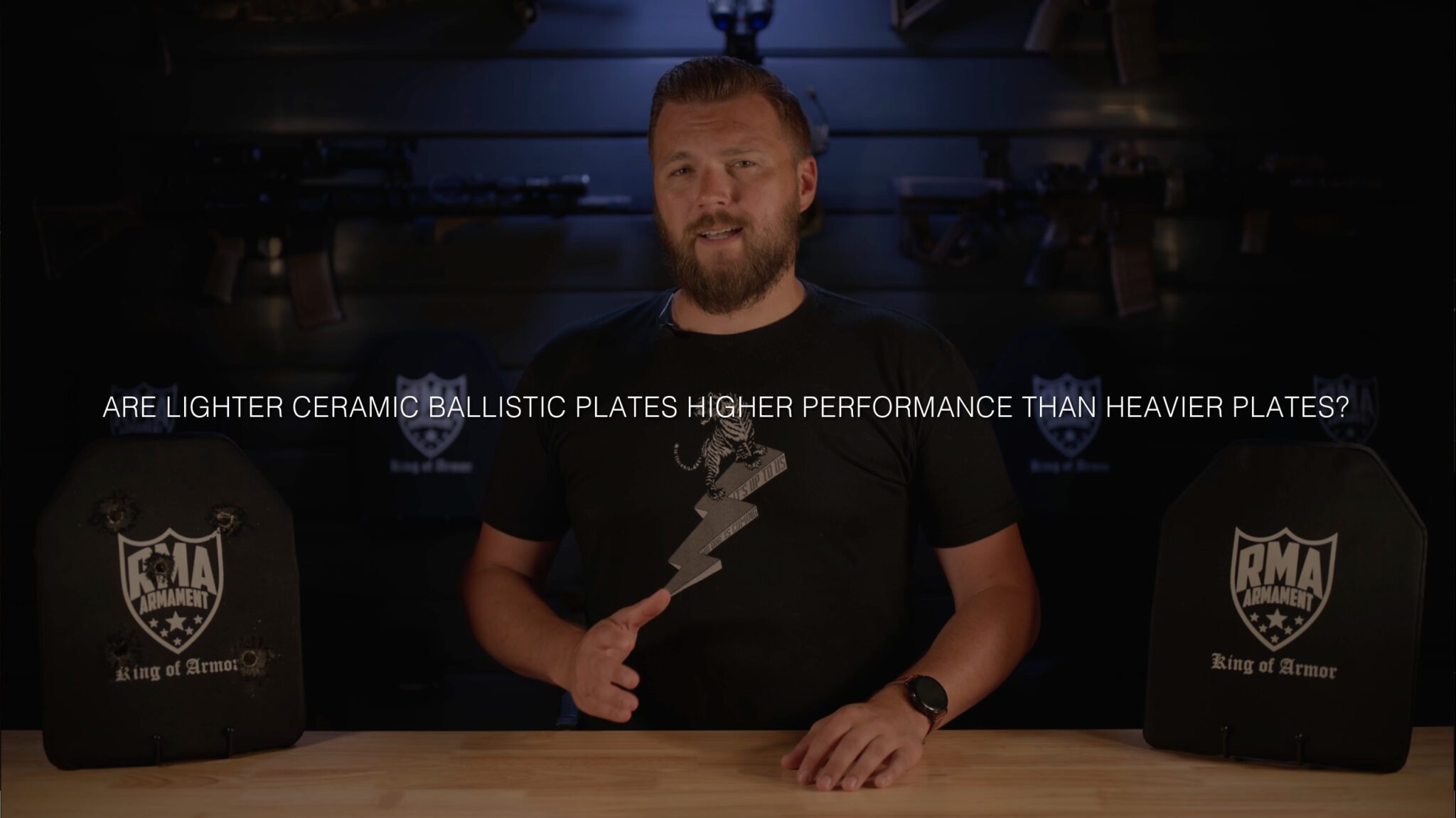 Recently, we were asked about which one has higher theoretical performance. So, let’s talk about it.

The big difference between a lighter plate and a heavier plate is the strength of the material, usually derived from some form of superior molecular bonding. That chemical makeup difference means that the reason that one plate should be lighter than the other is because we can use far less mass to achieve the same ‘stopping power’ thanks to the higher kinetic energy threshold required for impacts to break those stronger molecular bonds.

But therein lies the theoretical problem; we’re not using the same mass equivalent in a lower end heavier plate that we’re using in a higher-end, lighter-weight plate. In essence, you’re getting less material overall when you get a higher end plate.

It’s entirely likely that if we used more mass than necessary with lightweight materials, we would end up with a high-performance plate that far outshines every other level 4 body armor plate out there. However, It would be relatively expensive and would lack market appeal since it would be far more armor and weight than necessary to achieve the desired NIJ Level IV Certification end result. We talked about this a little bit when we addressed the need for a plate that soundly defeats .338 Lapua at close range.

Simply put, it’s the equivalent idea of making an affordable 12 pound Level 4 ceramic ballistic plate. Sure, we could do it and probably outperform every other Level IV ceramic ballistic plate on the market, but it ends up being 12 pounds. That’s not the kind of thing you would want to wear in a combat situation, and trying to explain to consumers the speculative goal this plate is trying to achieve is a dubious task at best. Plus, it would be more expensive than existing level four body armor plate offerings from both ourselves and our competitors while officially achieving the same goals according to NIJ.

At the end of the day, we in the armor industry largely use NIJ parameters as designed from input by experienced military and law enforcement personnel as the baseline performance metric to achieve at any weight. It’s valuable in many respects because it gives us a way to competitively measure performance, weight, and price point in a meaningful way, but it’s also great because those measurement metrics are useful information points for consumers. It would be really difficult to sell a level 4 plate at 12 pounds that costs more than a level 4 ceramic ballistic plate at 8 pounds without a scientific and mass-marketed way of describing that performance the way we can do with a lightweight plate or a more affordable but slightly heavier plate that meets NIJ Level IV parameters. After all, armor performance is only relevant when you’re able to operate while protecting yourself from threats you’re likely to encounter. There’s a law of diminishing returns on everything, including body armor. There’s a reason why nobody goes into combat in an EOD suit.

Additionally, current level 4 offerings are doing a great job of protecting those in harm’s way as it stands. A .338 Lapua plate that soundly defeats the round at a 15-yard NIJ spec test isn’t particularly relevant since it’s likely that nobody has or ever will be shot by a .338 at 15 yards. These higher-powered rounds are rightly utilized at longer ranges due to air friction degrading velocity over distance and compatible weapon systems largely lack the portability and automatic fire capabilities of smaller rounds while being dangerously overpowered for an urban environment. When we start to look at rounds like .338 Lapua, .50 BMG, and other high-powered rounds, we would want to look at how these plates perform against these rounds at longer ranges where they are a more realistic threat. And while there are a lot of variables including hot hand loads, AP ammunition, barrel length, and distance to target, what we often find is that many of these rounds on impact over these long distances result in impact profiles substantially similar to the rounds that level 4 plates are already designed to defeat at close range. To demonstrate an extreme scenario, there is theoretically a distance from which even a level IIIA soft armor pistol-rated vest will defeat a 50 BMG given the loss in velocity due to air friction over a long enough distance, notwithstanding the angle necessary to overcome gravity and the inevitable follow-on problem of terminal velocity of a vertically-oriented round. What we want to do is build armor based upon likely scenarios that one might encounter in a war zone, an active shooting, or other events where you might encounter firearms posing a danger to your life. 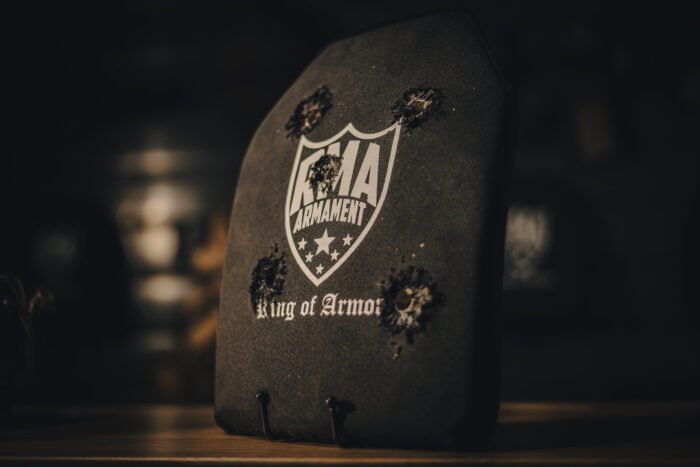 So do lightweight or heavier level IV plates have higher performance? It isn’t immediately clear either way. All plates are made with the minimum amount of material necessary to achieve the desired end result of the manufacturer. If all they ever do is test to NIJ Level IV, that’s just about the top end of our knowledge about the capabilities of those higher end plates. Since we as armor companies have to sell to what consumers are looking for, we’re not in the business of adding extra weight and cost in areas that won’t matter to consumers. Because NIJ doesn’t test above level IV when rating something, a “Level V” label would be disingenuous since it doesn’t exist, we would be creating a plate that outwardly appears to be under-engineered, expensive, thick, and heavy compared to other options on the market. Because of the existence of the colloquial “Level IV” plate marketing terminology based on the NIJ rating system and the knowledge gap between engineers and consumers, there really isn’t any room to invest in building a plate substantially stronger than current Level IV offerings that would amount to anything other than pouring money into a black hole.

It’s very likely that because these materials have been shaved down to achieve baseline NIJ Level IV test specs, you won’t notice any real additional performance gains from a lighter plate over a heavier one, particularly among much more powerful rounds like 30-06 AP that are relevant to NIJ testing. It is possible that there may be some performance arbitrage in lower-powered softer rounds like M193 5.56 or 9mm that aren’t a part of rating Level IV body armor plates by withstanding and defeating a higher total round count than a heavier plate thanks to presumably lower crack propagation across the plate with each hit when utilizing superior molecular makeup and lower mass density, but these types of gains are only speculative and likely dependent upon a variety of factors such as shot placement, barrel length, bullet construction, and distance.

TLDR; ceteris paribus, it’s possible that some lighter weight ceramic ballistic plates might have slightly better performance in some small ways than heavier plates, but we wouldn’t want to count on it because of the nature of plate design. Remember that unless a company like RMA is routinely overbuilding their plates to achieve higher performance than official ratings measure, you should assume a minimum baseline standard of whatever it is the manufacturer is telling you it is and nothing more, especially when they are advertising the weight of the plate as the top value point. One of the easiest ways to trim weight on ultra-lightweight plates is to shave off as much material as possible to pass the absolute bare minimum of tests that are required for certification since round construction and velocities are kept within a very narrow range for consistent testing. Don’t expect an ultra-light plate to do much more than it’s rated to do. Because we overbuild our ceramic ballistic plates, it would be difficult to say what the performance ceiling is on anything without spending huge amounts of money testing every possible impact configuration imaginable multiple times to confirm performance consistency, and that would be largely useless information to most consumers while adding extra cost to every plate to recover R&D expenses. We build each plate to have multi-hit performance against their rated threat, but that doesn’t mean 2 rounds are the end of their protective capabilities.  Check out the kinds of tests that people like Buffman Range are doing on Youtube to see where the outer performance limits of your prospective purchase might be.